Get to know Master Somnath Sikdar: 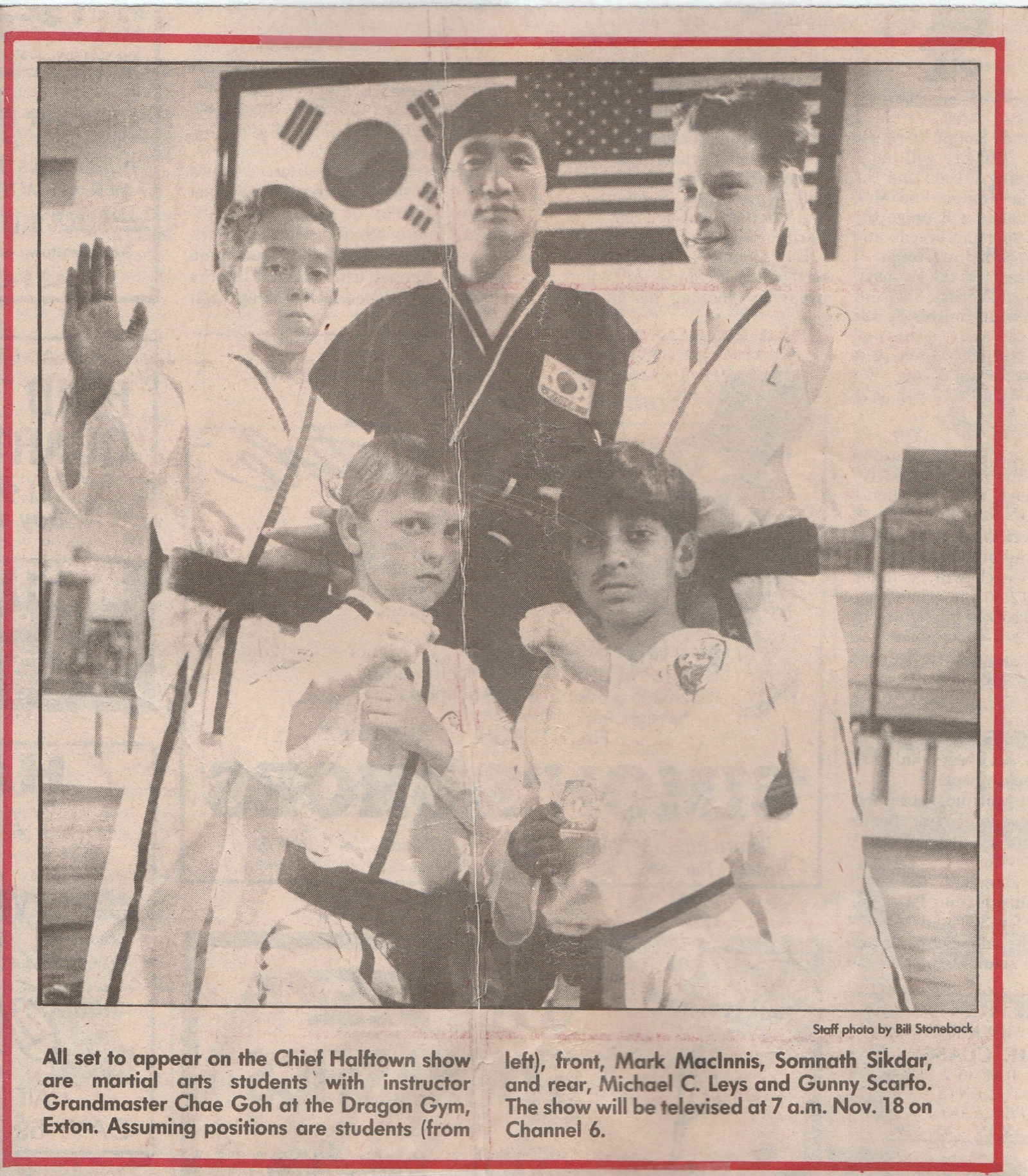 It was a long time ago, and I was only 6 years old, so the motivations were not solely my own.  Honestly, the biggest reason was the Karate Kid movies.  Karate Kid 2 had just come out and that definitely peaked my interest.  Plus, I was a pretty weak, small and shy kid.  I'm sure my parents were looking for a way to help me develop both confidence and athleticism.

The decision wasn't mine, it was my parents'.  I actually do have vivid and fond memories of traveling from school to school with him and meeting different instructors.  At that time, martial arts schools were few and far between and there was no internet for research.  It was a pretty involved process, but ultimately he decided on enrolling me at the Dragon Gym with Grand Master Goh.  To this day, I remember being in Grand master Goh's office (which is now my office:-)) and trying to perform some rudimentary kicks.  I don't think it went well.  Anyway, something clicked with Grand Master Goh and dad so here I am.

3.      How did you get involved with teaching/becoming an instructor?

When I was coming up through the ranks as a color belt, we didn't yet have a formal instructor development program.  At that time, certain students were picked to be "Team Captains".  When I was a red belt, two belts before black, I started going to the gym everyday to practice.  I would go in early and practice all of my techniques before class.

One of my instructors at the time, Robert Ott, actually asked why I was coming in so often.   I knew we were traveling to India that summer so I told him I just didn't want to fall behind in practice since I was getting so close to black belt.   I guess he liked what he heard, and invited me to become a Team Captain.

For a couple of years I helped with the kids classes, eventually earned my second degree and started attending adult classes.

When I was 14, Dragon Gym launched a formal instructor development and certification program.  Grand Master Goh invited me to be a part of this as well.   From that point on I knew that martial arts would always be a part of my life.  I went to the gym early every day to work out and learn from Grand Master Goh and helped teach the classes all through high school.  I haven't stopped teaching since.

4.      You’re also a certified Kettlebell Instructor.  How did you train for that achievement?

In 2005, I met Randy Hauer and Brian Petty at a local health club and they were kind enough to introduce me to kettlebell training.   A short time thereafter Brian joined the staff of Dragon Gym and started the Exton Kettlebell program.  He and I frequently trained in boxing and with kettlebells together.  When the Russian Kettlebell Challenge Instructor Certification (RKC) came to the United Sports Training Center in Downingtown, PA it just made sense to go through the course to get the knowledge from Pavel and get the experience.

Knowing that the RKC would be rigorous, the training regimen was thorough.   Monday, Wednesday and Friday mornings consisted of double kettlebell clean and press, front squats, swings and pushups.  Tuesday and Thursday mornings were kettlebell snatch volume and sprints.   Evenings always consisted of martial arts training of some sort: Taekwondo, Boxing or Brazilian Jiu Jitsu

5.      Tell me a little bit more about your training regimen, including cross training

My Training regimen is largely the same as it was when I was preparing for my Kettlebell Certifications as well 5th and 6th Degree Black Belt Tests, there's just less volume now since I don't have a forced deadline.  It's a maintenance program, for now.

6.      What would your advice be for someone considering Martial Arts Training.

Do it. Seriously, just do it.  Martial arts training has shaped my life positively in so many ways, it's hard for me to find any reason for someone not to. I've seen it change the lives of children and adults.   Need something more tactical?

First, be patient...with yourself.  Martial arts training of any kind requires a lot of skills and qualities you may have never used.  At first progress will feel slow, then it will be fast, then it will seem slow again...that totally normal and to be expected.

Second, be consistent.  Come up with a schedule that works for you and stick with it.  Make a plan, then follow the plan.

Third, have fun!  Martial arts training is hard, but it's also a ton of fun.  You get a great work out, get to hit stuff, and you'll meet a bunch of nice and supportive people.

7.      What about someone with ambitions of becoming a Martial Arts instructor?

Don't wait till you're a black belt.  So many students are focused on earning their black belt that they don't realize the benefits of teaching others.  The best way to learn something is to teach it, to share it with someone else.  Teaching won't take away time from your training, it will enhance it and accelerate your progress! If you're really serious about becoming a martial arts instructor, get in touch, we have a development program for you.

8.      What kind of benefits have you received from your Martial Arts training at Dragon Gym?

10.  What Fears and Reservations did you have about starting here?

I started so long ago, it's hard to remember.  However, generally I face two fears when I start something, anything new.

Ultimately, the journey of any new endeavor changes us whether we succeed or fail.  It is that unknown which scares us...but also draws us in.

Master Somnath Sikdar is the Head Instructor at the Dragon Gym and has been training in Tae Kwon Do and Hapkido for over 30 years under Grandmaster Chae Teok Goh. He is currently a sixth degree black belt and is certified by the World Taekwondo Headquarters (Kukkiwon). His training has covered a broad spectrum of martial arts to include a variety of weapons, self-defense, traditional and sport Tae Kwon Do. He has also studied Hapkido under Grandmaster Han Jae Ji.

In conjunction with martial arts, he instructs training with the Russian Kettlebell, and holds the Level 1 RKC and Level 1 SFG Certifications. While the focus of kettlebell and barbell training is strength, the other side of the same coin is function and quality of movement. For this reason, Master Sikdar uses the functional movement screen with his students and is a Level 1 and Level 2 certified FMS expert.

Master Sikdar has competed successfully in local, state, and collegiate tournaments. In addition, he continues to study western boxing, Muay Thai and Brazilian Jiu-Jitsu. He has attained a BSE in Electrical Engineering, along with minors in Systems Science and Economics, from the University of Pennsylvania. While completing this degree he was the President, Head Instructor, and Coach of the University of Pennsylvania WTF Tae Kwon Do Team.